One of the most widely used streaming gadgets on the market, the Amazon Firestick, is continually being improved upon. One of such methods is via jailbreaking it.

There is nothing wrong with them doing this, but they should be ready for the onslaught of multimedia. A media player program has previously been downloaded to a jailbroken Firestick.

Third-party programs are frequently sideloaded into Firestick by those who have jailbroken their streaming devices. The situation can then get complicated, and the debate over whether doing so is legal or unlawful starts.

This article will simplify things for you so that you may know if jailbreaking a firestick is legal or not. 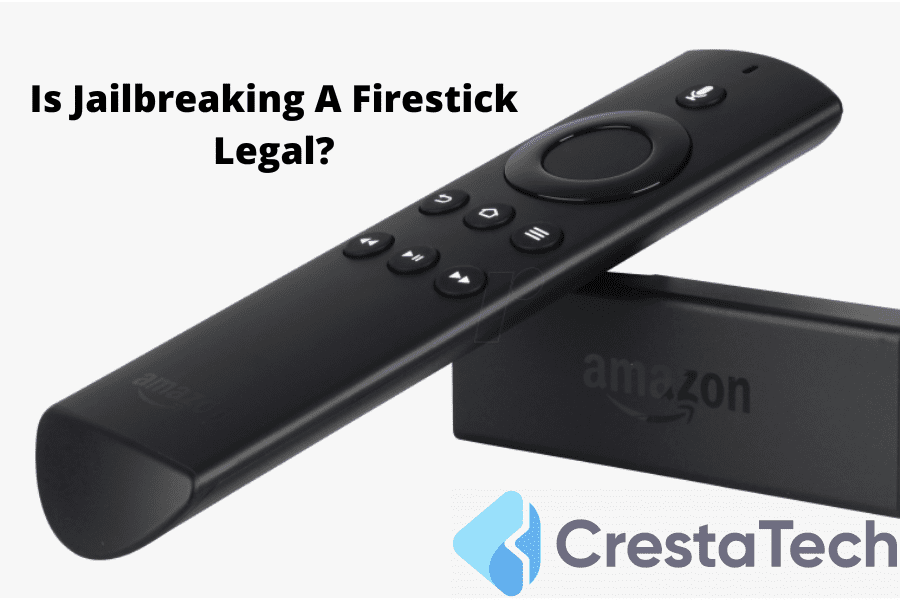 What Does “Jailbreaking” A Firestick Mean?

Although the phrase “jailbreak” sounds ominous, it refers to a rather simple tech procedure that merely removes software limitations imposed by a device.

It enables you to install applications, extensions, and other software that the factory default version would otherwise forbid.

For the Amazon Firestick, jailbreaking enables the installation of programs and add-ons that aren’t offered by the Amazon App Store.

So, once you know the exact meaning of the term ‘Jailbreaking’ and what jailbreaking a firestick means, you can now move on to a common query to know if it’s legal or illegal to jailbreak a firestick.

Is It Legal to Jailbreak A Firestick?

Yes, it is allowed to jailbreak a Firestick. The Digital Millennium Copyright Act (DMCA), as it was updated in 2018, states that it technically fits under “Fair Use.”

In essence, the argument was that if you let tamper with proprietary software, a rival solution would ultimately emerge.

It makes clear why these businesses took this position; they wanted to maintain their walled garden.

Unfortunately for them, the DMCA’s exclusions are reviewed every three years, and in 2010 Congress decided that some “jailbreaking” methods met the requirements to be excluded from this rule.

Since then, other jailbreaking exceptions, such as those for streaming devices, have been added to the list.

However, just because jailbreaking a device is permitted doesn’t guarantee its security.

Is It Secure to Jailbreak A Firestick?

Amazon invests a lot of time and resources into making sure the Firestick is safe and that only safe and secure apps are available in their App Store.

If you start downloading apps from sources other than the Amazon ecosystem, such apps may include malware that is intended to steal your personal information.

Additionally, programs downloaded from sources other than Amazon’s App Store are frequently not optimized for your Firestick and might cause it to freeze or crash as well as other serious stability problems.

Amazon often upgrades the Firestick software, especially when fresh security flaws are found or made public.

Your Firestick stops receiving these software updates once you jailbreak it.

If You Are Streaming, Then Is It Legal?

Simply said, streaming material is when you watch or listen to something that hasn’t been completely downloaded to a device. When you stream, you access the content through the internet, but it actually resides on a different computer or server.

However, it is considered illegal to stream copyrighted media using a jailbroken Firestick.

It is legally possible to get a punishment of $250,000 and up to five years in federal jail for this type of copyright violation. This also applies to theft done without intent to profit.

But in practice, you’re quite unlikely to suffer any penalties if you illegally stream a movie while at home with your wife and children.

When individuals “publicly perform” an unlicensed work or broadcast the streaming content to a wide audience, they may be infringing on third parties’ copyrights (according to the Copyright Office).

For instance, if your neighborhood pub advertises a movie night and streams a pirated movie using a jailbroken Firestick.

Government authorities and the media industry are much more inclined to pursue those who download and disseminate information widely for the benefit of the general public and for financial gain.

Act of 2020 to Protect Legal Streaming

In fact, the US government approved new legislation in 2020, known as the Protecting Lawful Streaming Act 2020, because they are so keen to take action against people who attempt to make money by illegally streaming video.

The criminal penalties for individuals who “willfully and for commercial profit or private financial gain, unlawfully stream copyrighted media” have been dramatically increased under this statute.

Before, unlawful streaming done for money was considered a misdemeanor. The DOJ may file felony charges under this new statute against those who offer such unlawful services, as opposed to those who use them.

Troublesome Individuals Using Firesticks That Have Been Jailbroken

After spending hours looking, I couldn’t uncover a single instance of a US streamer running afoul of the law.

The closest instance I could find included 240 people being detained and punished in the UK for using a service that gave them access to numerous well-known streaming services, including Netflix, Sky, Amazon Prime Video, Mediaset Premium, and Dazn.

Every US news item on streaming and/or jailbroken Firesticks involves people looking to earn money.

A Michigan man was detained in 2012 on suspicion of violating copyright laws while running websites that streamed pay-per-view events and live athletic events unlawfully online.

The Sheriff handling the case publicly said that “any customer discovered utilizing one (a jailbroken Firestick) in their house will face a misdemeanor.” This final example is intriguing.

But to me, this seems more like a threat disguised as a scare technique.

How probable is it that the sheriff will go door-to-door and issue misdemeanors to jailbroken Firestick users using the resources of his department? Do they not have more essential tasks to complete?

The good news is that 99.9% of individuals merely want to watch material in the privacy of their own homes with their jailbroken Firesticks, not earn any money. And the majority of those individuals won’t encounter any issues.

With A Jailbroken Firestick, Using A VPN

A VPN is typically installed on Firesticks after they have been jailbroken. A Virtual Private Network is a VPN.

Using a VPN has many benefits and one of them is that it allows hiding your IP address from sites which are trying to gather information about you. You cannot be traced or recognized as easily as you might if you merely utilize the internet without a VPN since your IP address is concealed.

Therefore, it is highly recommended that you should make use of some kind of VPN service that can help you hide behind a proxy.

When you broadcast pirated material using your jailbroken Firestick, things soon get unlawful. The maximum penalty for violating the law is five years in jail and penalties of $250,000.

The good news is that nobody has been in trouble for using a jailbroken Firestick, as far as I know.

When individuals utilize jailbroken Firesticks or streaming video to earn money, that’s the only time it seems like they run into problems.

You’re probably okay to do so if all you want to do is stream media on your jailbroken Firestick in your own house.

However, if you still desire to protect your IP address from snoopers, I strongly advise using a VPN every time you watch material.