Your Samsung TV is most likely your primary form of entertainment at home. When it chooses to act up, it may be extremely inconvenient.

Many people have claimed that when they want to watch TV, it unexpectedly and constantly turns off and on.

This is sometimes referred to as inadvertent power cycling. We will walk you through the actions you may take to address the issue so you can resume watching your preferred movies as quickly as possible!

In this article, I will address your query, Why Does My Samsung TV Keep Turning Off? and How to Fix it easily?

Why Does My Samsung TV Keep Turning Off?

There are numerous common causes for a Samsung TV to turn off within a few seconds. Let’s begin with a few of the simpler fixes before moving on to ones that will need you to disassemble your television.

1. Issues with the Power Supply

Quite often, the solution is as simple as double-checking your power cable and socket. If there is insufficient electricity, your Samsung TV will not be allowed to stay on, resulting in abrupt turn-offs within 5 seconds.

If that’s the case, here are several solutions:

A voltage breaker or extension connector might possibly be the source of the problem. Before changing your power cable, double-check these too.

Preferably, you should remove the surge guard and extension cables and simply plug the TV straight into the socket to see whether it solves the problem.

2. Check If Anynet+ (HDMI-CEC) is Enabled

HDMI Consumer Electronics Control (HDMI-CEC) is basically an HDMI function that improves the interoperability of your smart devices. It allows your HDMI-connected electronics to manage your television and your television to control those devices.

For instance, using HDMI-CEC, you might use your television remote to operate your DVD player. Whenever you switch on the DVD player, it might seamlessly switch the input on the television to HDMI.

In certain circumstances, HDMI connections are set to switch off the TV promptly when they are turned off. This functionality is called Anynet+ (also termed HDMI-CEC) by Samsung, and if your television is going off on its own, you must investigate it.

To Enable Anynet+ (HDMI-CEC) in Samsung TV, follow the steps below.

Step 1: Click on the Home Button on your Samsung Remote. 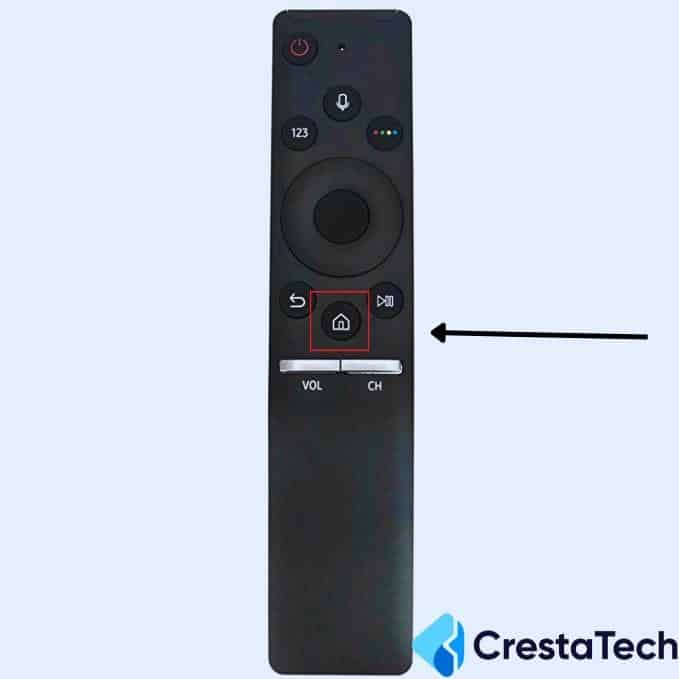 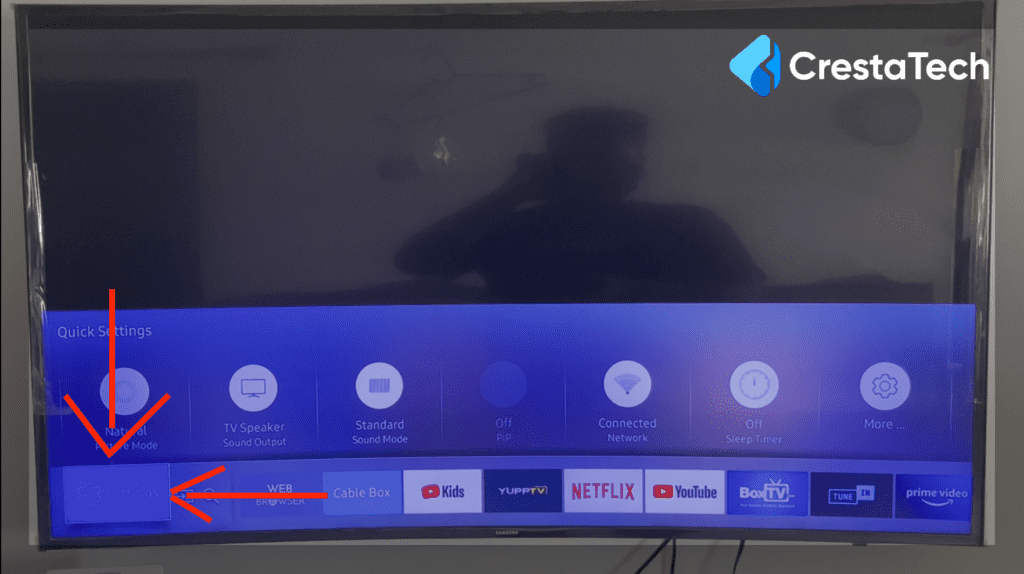 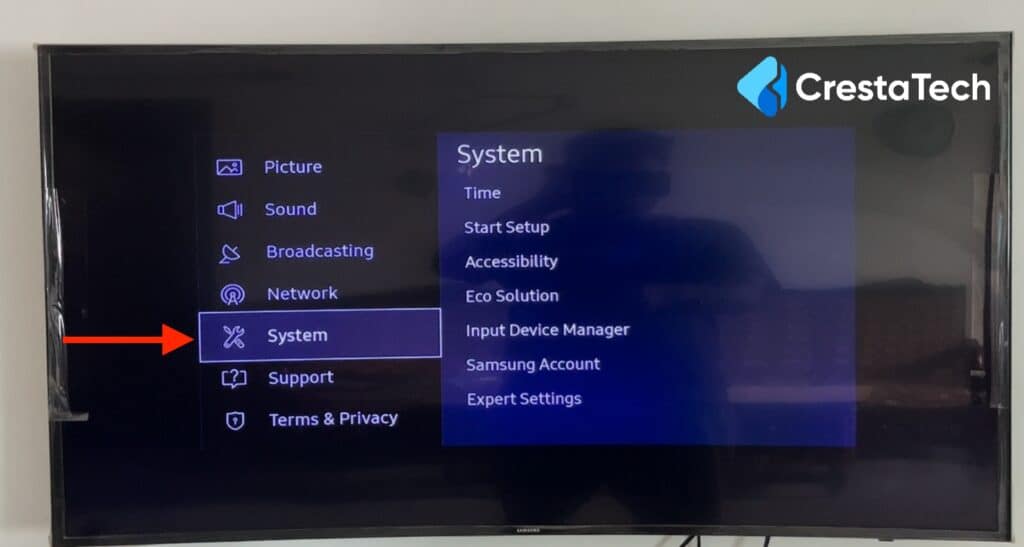 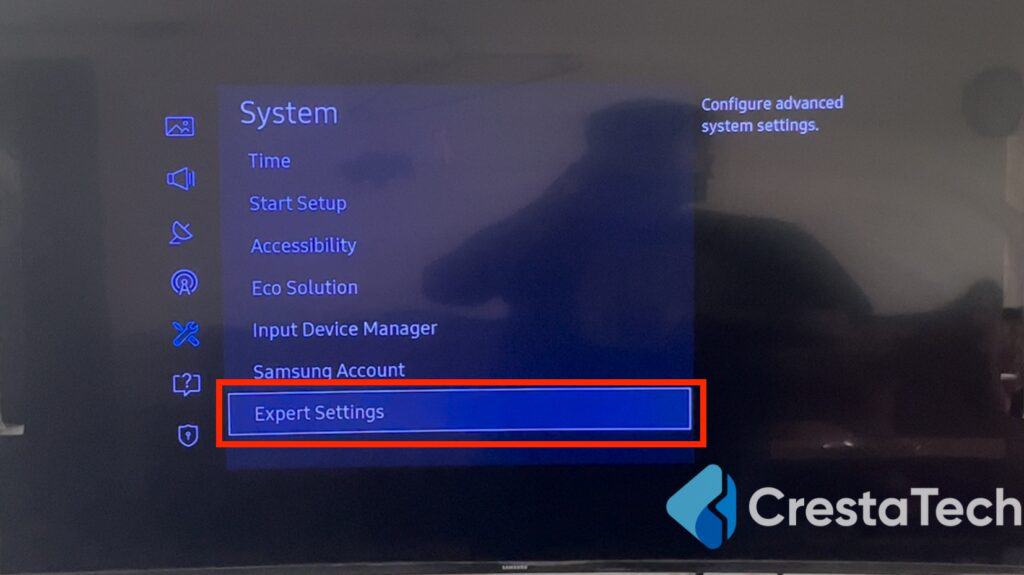 Step 5: In Expert Settings, Scroll down and in Anynet+ (HDMI-CEC) and select On. 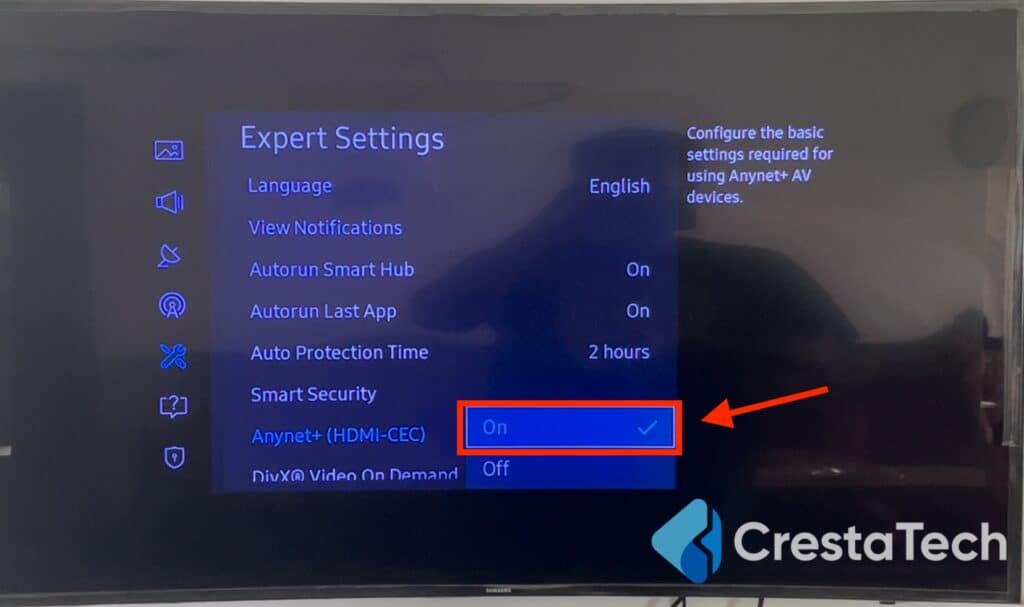 That’s it, you have now enabled Anynet+ (HDMI-CEC) on your Samsung TV.

Follow the video tutorial below on How to Turn On Anynet+ on Samsung TV if the written version is hard to follow.

Please remember that you’ll no longer be allowed to navigate other devices with your television remote.

Check to see if turning off Anynet+ resolves your problem. If that doesn’t, there are numerous more likely causes for your Samsung TV to switch off every five seconds.

3. Your Samsung TV Is Overheating

Due to a major lack of sufficient airflow, your Samsung TV may potentially turn off by itself unexpectedly. Your television may overheat and glitch if there is insufficient circulation and airflow.

Here’s something you should do if this is the case:

4. Your Television has a Power Short

Remove the back paneling from your Samsung TV to reveal a connection that links the motherboard to the power source circuit.

This cable has been known to generate a short between both circuits occasionally, culminating in the television going on and off.

Eliminate the short and fix your issue by detaching the 4th pin from the tip of this cable connector.

Press in and then lift up to take out this cable. This will interrupt the transmission that is shorting out the television, forcing the motherboard to reset automatically.

Another cause of your Samsung TV turning off every five seconds is it is affected by viruses. Smart TVs, like PCs, may become infected with viruses when you install a program or utilize it to access the Internet.

A virus might be interfering with your television’s internal system. That is why it switches off after five seconds.

To Scan Your Samsung TV, follow the steps below.

Step 1: Click on the Home Button on your Samsung Remote.

Step 5: In Expert Settings, Scroll down and Select Smart Security. 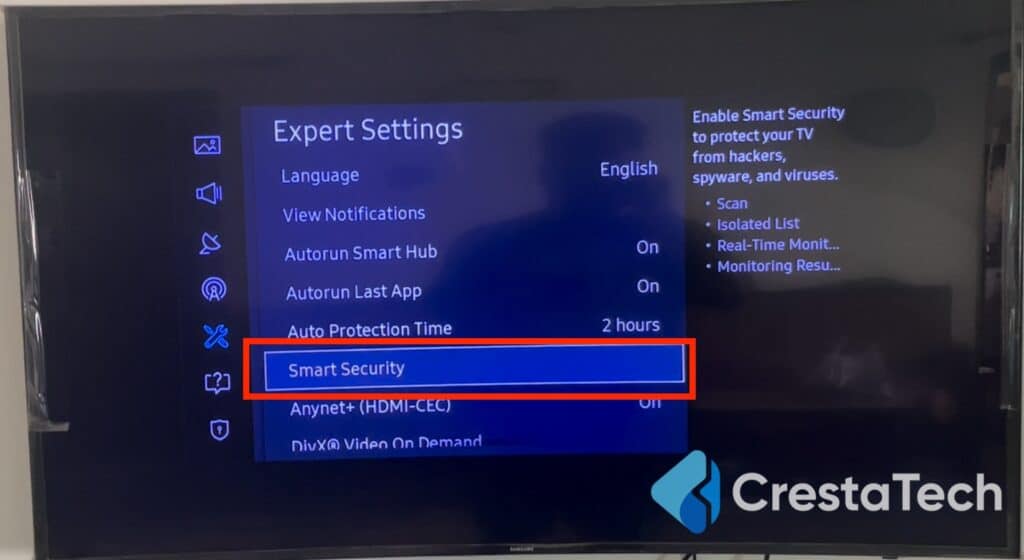 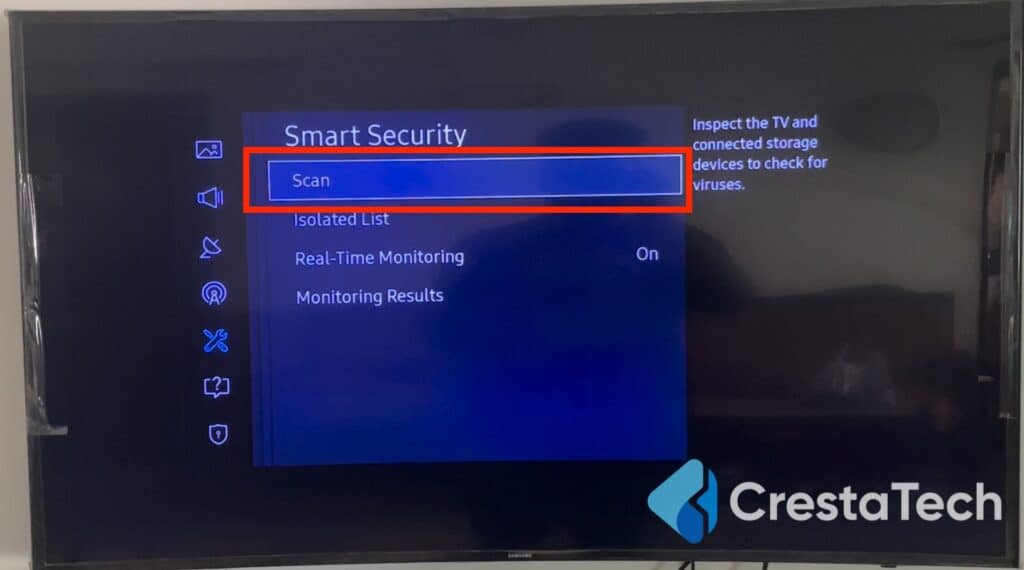 Once you click on Scan, it will start to scan your TV for any virus.

Follow the video tutorial below on How to Scan Samsung TV for viruses if the written version is hard to follow.

6. Update Your Samsung TV to the Latest Version

A Smart TV requires regular updates to guarantee that the system functions properly. As a result, if your television is out of date on software updates, it may malfunction.

All you have to do is check for the most recent software upgrade for your television model. What you must do is as follows:

Note: Make sure to have a proper internet connection and connected to the TV through ethernet or WiFi.

Step 2: Scroll Down and Select Support. 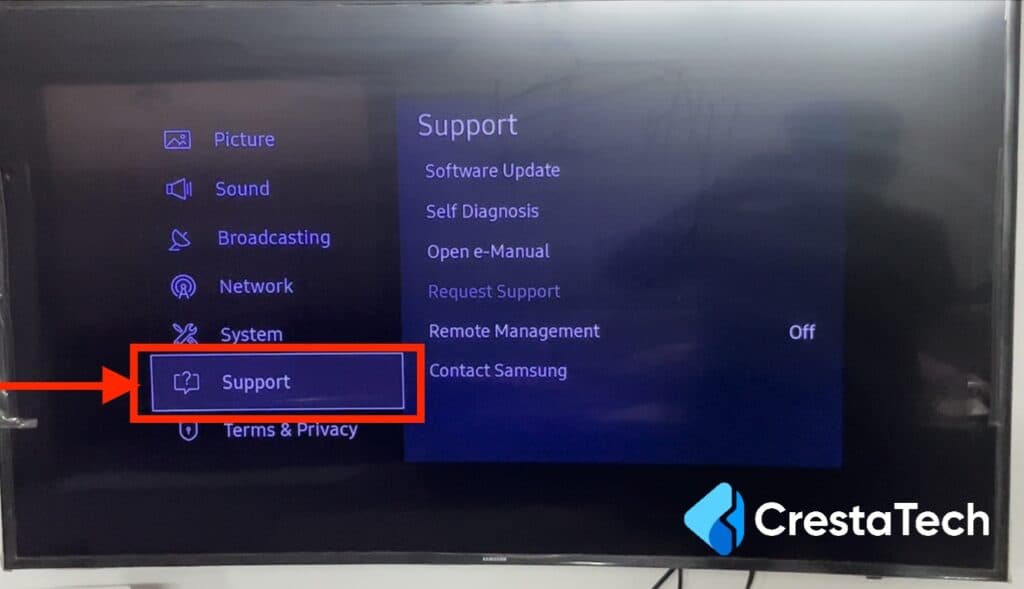 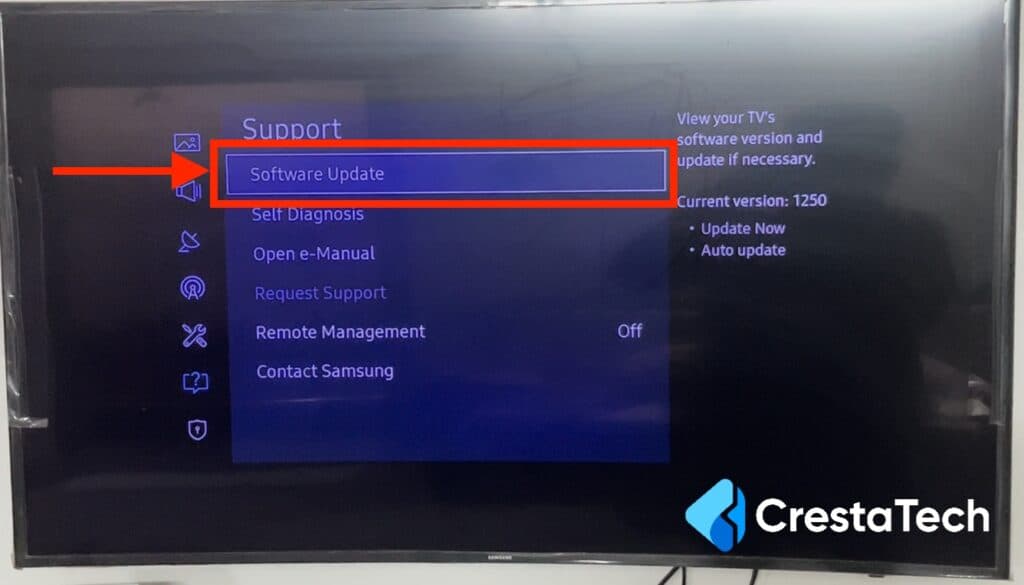 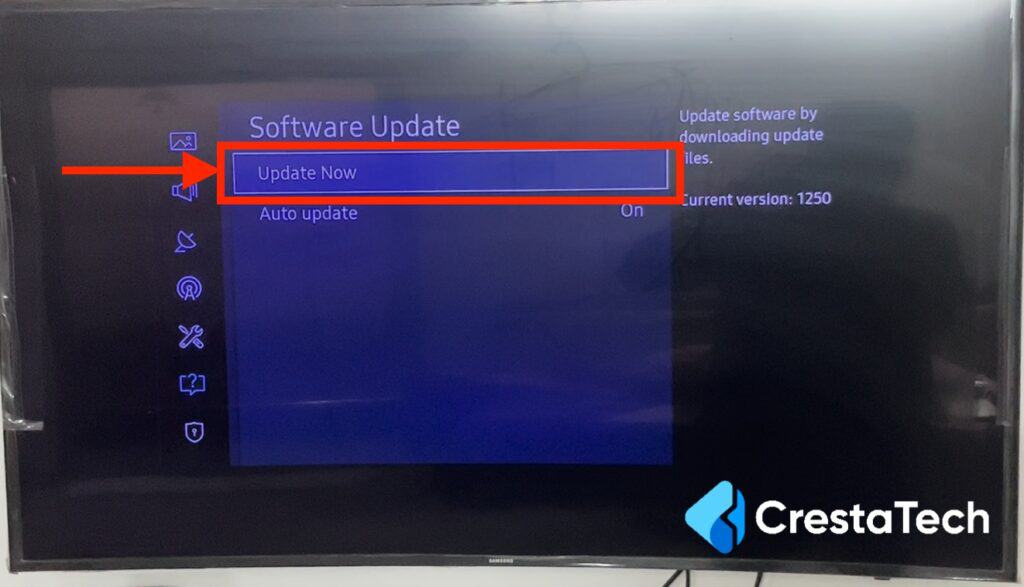 Step 5: Once you click on Update Now, it will start checking for updates and if there is any update pushed by Samsung, then it will update. 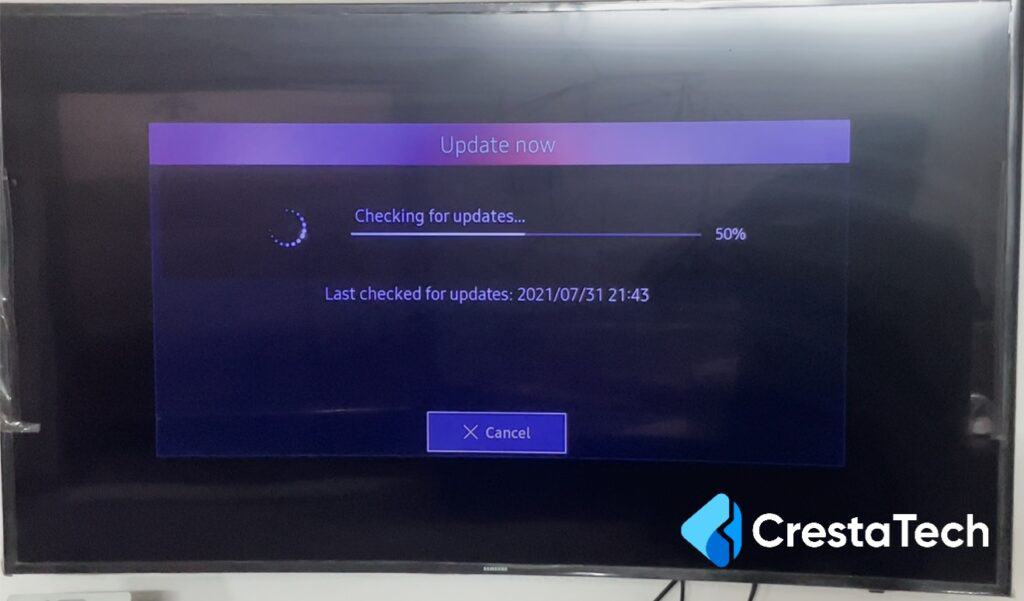 Check this video if you need detailed step-by-step instructions.

This procedure may require a couple of minutes, but the television will notify you once it is complete

7. The Motherboard of Your Samsung TV is Failing

Regrettably, another cause of your Samsung television turning off every five seconds is a faulty motherboard. Its motherboard permits all electronic connections inside the television and allows various system components to interact. If it malfunctions, the TV will also crash.

Particularly, the issue is frequently caused by failing capacitors on the motherboard. Capacitors may malfunction for a variety of causes, but the most common is an electrical surge across a thunderstorm.

The smartest thing you may do is have the motherboard thoroughly repaired or replace it entirely.

Nevertheless, if you’re really daring, you may remove the back paneling of your television and inspect the motherboard for abnormal bulging capacitors. But i totally recommend you to consult a TV expert or go to the Samsung Authorized Service Center.

8. Disconnect Your Samsung TV From the Internet

Smartphones, smart home gadgets, as well as other televisions linked to the very same internet connection as the Samsung TV may interact with it.

Certain items may be accidentally interfering with your television, which you can test by unplugging your television from the network and utilizing it for a time to see whether the problem persists.

Samsung televisions are among the most reliable TVs in the marketplace, although they are not without flaws. Those, like every television, might fail.

Here are a few of the causes of a Samsung TV shutting down every five seconds: